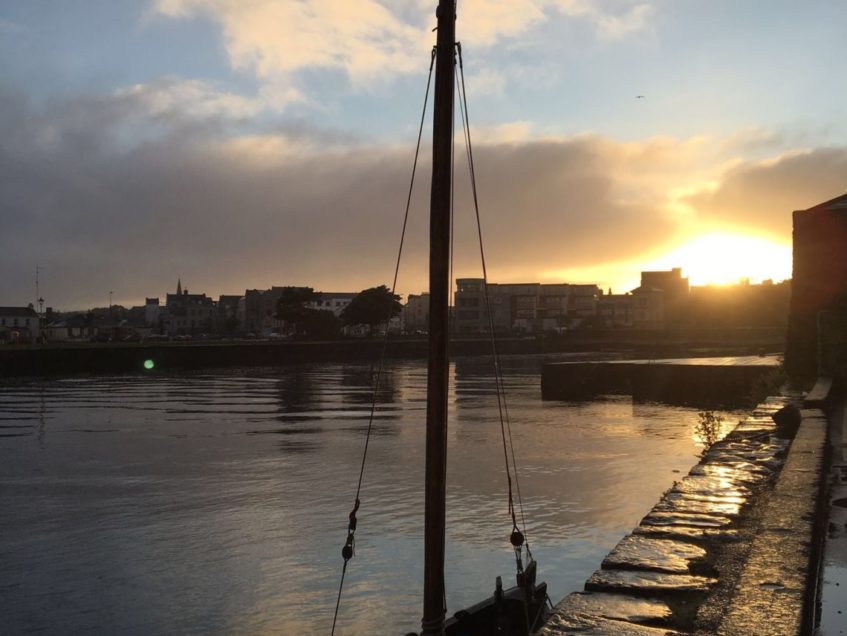 The city’s name is from the river Gaillimh  The word Gaillimh means “stony” as in “stony river” (the mythical and alternative derivations are given in History of Galway).

In common with many ancient cities, Galway has its own origin myth. According to this mythic version, Galway is named after Gaillimh (Galvia), the daughter of a local chieftain, Breasail, who drowned in the River Corrib.

With a population of 75,529, Galway is the fourth most populous city in the State and the 23rd most populous area of local government.

The symbols of the office of the Mayor and the emblems of the dignity of the City Council are the Civic Sword (1620s) and the Great Mace (1710) which are carried in procession before the Mayor and Council on solemn civic occasions.

Galway has a year-round mild, moist, temperate and changeable climate, due to the prevailing winds of the North Atlantic Current. The city experiences a lack of temperature extremes, with temperatures below 0 °C (32 °F) and above 30 °C (86 °F) being rare. While extreme weather is rare, the city and county can experience severe windstorms that are the result of vigorous Atlantic depressions that occasionally pass along the north west coast of Ireland. Most of these storms occur between late autumn and early spring. Due to the city’s northerly location and its longitude, Galway has long summer days. Daylight at midsummer is before 04:00 and lasts until after 23:00. In midwinter, daylight does not start until 08.49, and is gone by 16:19.

Eyre Square is at the centre of the city.

Galway is known as Ireland’s Cultural Heart (Croí Cultúrtha na hÉireann ) and is renowned for its vibrant lifestyle and numerous festivals, celebrations and events

On 1 December 2014, the Director General of UNESCO announced the official designation of Galway as a UNESCO City of Film.

In 2007, Galway was named as one of the eight “sexiest cities” in the world. A 2008 poll ranked Galway as the 42nd best tourist destination in the world, or 14th in Europe and 2nd in Ireland

Galway City has a reputation among Irish cities for being associated with the Irish language, music, song and dancing traditions. It is sometimes referred to as the ‘Bilingual Capital of Ireland’, although like elsewhere in the Republic of Ireland, inhabitants converse mostly in English.